Georg W. Claussen was one of Germany's most extraordinary entrepreneurial personalities. Born in June 1912, under the reign of Emperor Wilhelm II and before the First World War, he lived through two great disasters. He died at the age of 100 on March 21st, 2013 in his hometown Hamburg.

He was instrumental in rebuilding the nation following the Second World War, above all as CEO of Beiersdorf AG - a role he carried out for 22 years with entrepreneurial skill and warm humanity. Close co-workers emphasised his charisma, his modest demeanor and the amiable and open way in which he conversed. From early on in his career, his marked business talent in combination with his authentic personality made him a kind of father figure at Beiersdorf AG.

In Autumn 2017, a booklet about Georg W. Claussen was published as a private edition. If you are interested, we will gladly send you a copy upon request. 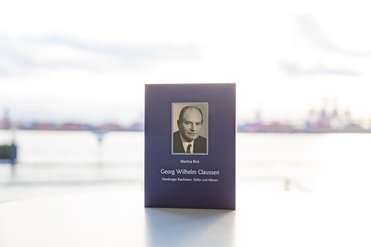 For the 100-year anniversary of the founding of Beiersdorf AG in1981, he founded the Claussen Stiftung under the umbrella of the 'Stifterverband für die Deutsche Wissenschaft'. Operations began in 1982. The foundation supported academically and technically gifted young people. The now legally independent Claussen-Simon-Stiftung is one of the largest private foundations in Hamburg.

For his extraordinary commitment to the goals and responsibilities of the Stifterverband, Georg W. Claussen was awarded the 'Richard-Merton-Ehrennadel' in 2005, the association's highest honour. The award commemorates Richard Merton (1881-1960), who encouraged the reestablishment of the Stifterverband following the Second World War and who chaired the Verband from 1949 to 1955. Georg W. Claussen is the bearer of the 'Großes Verdienstkreuzes des Verdienstordens der Bundesrepublik Deutschland' and the 'Verfassungsportugaleser in Gold' from the Freie und Hansestadt Hamburg. In 1987 he was awarded the 'Denkmünze in Gold zur Feier der Handelsfreiheit 1665 und 1867' from the Hamburg Chamber of Commerce and in 2012, the Heine-Haus Hamburg honored Georg W. Claussen with the Salomon Heine badge for his "exemplary work for the good of Hamburg and its citizens".

Ebba Simon, nee Westberg, was born on June 24th, 1906, the third of six children to the Hamburg lawyer Dr. Gustav Westberg and his wife Gertrud. Her mother was the niece of Dr. Oskar Troplowitz, the owner of Beiersdorf AG in Hamburg.

After the Second World War, Ebba Westberg married the Chemist Dr. Alfred Simon, who worked as the Head of Research and Development and Head Chemist at Beiersdorf AG in Hamburg. The couple had no children. Dr. Simon had previously worked at the Kaiser-Wilhelm-Gesellschaft, which became the Max-Planck-Gesellschaft following World War 2. As a scientist, he remained in contact with the Max-Planck-Gesellschaft until his death in 1978 and supported their work financially to a significant extent.

It was Ebba Simon's wish to donate a large part of her wealth to a scientific foundation. The Claussen Foundation, founded by her esteemed cousin Georg W. Claussen, found her favour, in large part because they regulary collaborated with members of the Max-Planck-Gesellschaft. Ebba Simon died in 1999 in Hamburg. The overall capital of the foundation, which was renamed the Claussen-Simon-Stiftung, increased considerably thanks to the donation made in her will.

On October 1st 2016, the Ebba Simon House was opened in Hamburg-Borgfelde. The student hostel was funded by the Claussen-Simon-Stiftung und the Klaus und Lore Rating Stiftung and was built by GBI AG. It provides living space for more than 200 students.

In October 2016, the book 'Ebba Agnes Simon und ihre Familie' was published by Hentrich & Hentrich, Berlin. The booklet was launched at a festive event held at the Heine-Haus Hamburg on October 28th, 2016.

Under the three categories School & Education, University & Academia and Arts & Culture, we offer scholarship programmes and project funding to pupils, students, doctoral candidates and emerging academics, along with artists, musicians and creatives.